PHP 8.0 is due for release on November 26, 2020. As the programming language that powers WordPress sites, PHP’s latest version offers new features that developers will find useful and improvements that promise to greatly enhance security and performance in the long run. It also fully removes a number of previously deprecated functions. PHP 8 is a massive change from previous versions.

In this article, we hope to provide insights detailing what this means for WordPress site owners, including recommended adoption strategies.

Should I upgrade right away?

No. The upcoming major version of WordPress, 5.6, is intended to be “beta compatible with PHP 8” according to the November 18 WordPress dev chat. This means that most core WordPress functionality will work, but unexpected bugs may still occur for some time, even without the presence of additional plugins or themes. WordPress has called for additional testing with PHP 8 in order to find and fix as many remaining bugs as possible.

At Wordfence, our Quality Assurance team is working to ensure that our plugin is compatible with PHP 8 in a variety of environments. Upcoming Wordfence versions will offer a similar level of partial support, though we have additional testing planned to reach full compatibility.

A vast number of WordPress plugins and themes will not be immediately compatible with PHP 8. Those that do not run into fatal errors during normal usage may still show unexpected behavior for some time.

What breaking changes does this include?

Some developers have long argued that PHP is insecure by default. While this is up for debate, it’s true that versions of PHP prior to PHP 8 are more fault tolerant and try very hard to ensure that code will run even if minor errors are present.

In other words, PHP 8 is not as lenient as previous versions. It will not try quite as hard to make code work no matter what.

Some functions and features that were deprecated in PHP 7.x have been completely removed. These include:

While most of these are no longer widely used, we have identified that create_function is still used in over 5,500 WordPress plugins, including extremely popular plugins with millions of installations. In some cases use of these deprecated functions may be intended for backwards compatibility with older versions of PHP. Many plugins, however, will need extensive refactoring as PHP 8 becomes more utilized.

For more in-depth information about what’s changed, our friends at Yoast have produced an excellent compatibility report intended for developers looking to ensure their software is compatible.

What security concerns are there?

PHP allows something called “Type Juggling.” This means that it can treat strings containing numbers the same way it treats integers or floats, and can perform math and do comparisons between these different types as long as the loose comparison operator == is used instead of the strict comparison operator ===. For developers, Type Juggling can be very useful and save time when writing code, but it can sometimes lead to unusual behavior.

A classic example of how Type Juggling can cause issues is that comparing 0==”blah” will return true. PHP 8 fixes this type of behavior so that these and similar comparisons (e.g., 0==”0blah”) will return false.

By and large, this will actually improve security. There are a number of exploits that can take advantage of PHP’s Type Juggling behavior to bypass nonstandard cookie, nonce, or password checks. Nonetheless, a large number of plugins use these loose comparisons, sometimes for critical functions. In most cases these will continue to work correctly when using PHP 8, but a few of them might actually rely on incorrect behavior in order to function properly. In a few rare circumstances, this might open up new security holes.

Likewise, many websites may remain on an insecure version of PHP in order to keep their legacy plugins running.

Finally, certain strains of malware rely on deprecated functions as well as PHP’s fault tolerance in order to obfuscate their intentions. These strains will cease to function or become more noticeable in a PHP 8 environment, but malware authors will adapt in time.

What performance changes are coming?

One potentially exciting feature coming to PHP 8 is JIT, or “Just In Time” compilation. PHP is an interpreted language, meaning that it is translated into machine code as it runs. JIT keeps track of code that’s frequently used and attempts to optimize the machine code translation so that it can be reused. This can result in a massive performance improvement for specific functionality.

The addition of JIT to other languages, such as JavaScript, has historically led to an explosion of new applications. For example, virtual machines running in JavaScript would have been unimaginable in the early days of the web. Certain tasks that would have required a module to be installed on the server in the past will become practical using pure PHP libraries.

For the time being, however, the actual performance improvement for web applications such as WordPress is minimal, and it will take a long time before the average WordPress user or developer reaps the benefits of this new feature.

While there are many other new features to make developers’ lives easier, it is unlikely that these will be used in WordPress plugins and themes for the foreseeable future, as most would break backwards compatibility with earlier versions of PHP still in use by many WordPress sites.

How long do developers have to update?

Each version of PHP has a life cycle of 2 years during which bugs are fixed, and an additional year during which security issues are patched. PHP 7.4 came out in November 2019. As the final version of PHP 7, this means that bugs in PHP 7.4 will be fixed until November of 2021, and security issues will be patched until November of 2022, at which point it will reach its “End of Life”. This means that November 2022 can be considered a hard cutoff date: all PHP code should be compatible with PHP 8.0 at minimum by this time, or risk being stuck on a potentially vulnerable version of PHP.

The transition to PHP 8 is one of the broadest and most impactful changes the language has ever seen. While it will be worth it in the long run, WordPress site owners and developers may be in for a rough ride in the short term. If you’re a website owner, start keeping a watchful eye on which of your plugins and themes are being updated or tested for compatibility and make a plan to replace the ones that aren’t. If you’re a developer, start testing your code and any dependencies on PHP 8, if you’re not already, and start making a plan to fork or replace any libraries that aren’t being updated. The WordPress ecosystem has been through difficult transitions in the past, and our open-source community has always grown and adapted.

For those who run a Bigcommerce store selling automotive parts & accessories, we have created a tool that will help your customers quickly find the parts that fit their vehicle. As you probably know, taking a massive catalog of parts and presenting those parts to  customers in an easy-to-search way is challenging. Our custom Make/Model/Year lookup tool combined with the faceted search feature (aka product filtering) in Bigcommerce makes this easy.

Instead of requiring your customers to drill down through endless categories and sub-categories to find the parts category they’re interested in, our MMY lookup tool will return results that ONLY apply to their vehicle.

Your customers will be able to select their vehicle’s year, make, and model and then be taken to a screen showing only parts which fit their vehicle. On this screen they can further filter by product category and as many other options as you want to present. 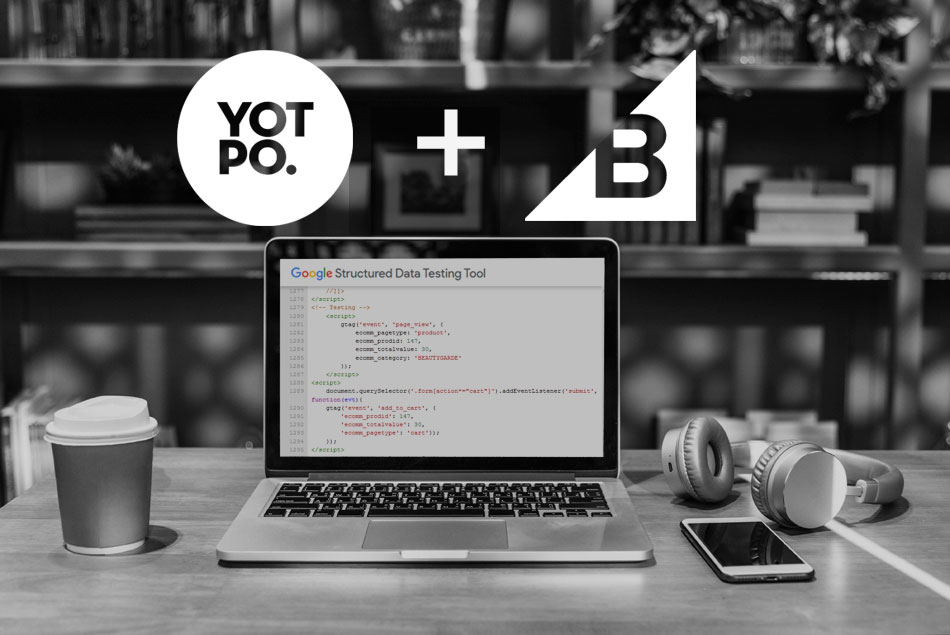 Given how often people now use the internet to search for a particular product, it’s critical that whatever you’re selling is accurately portrayed in search results. To this end, many eCommerce platforms and services like Bigcommerce and Yotpo automatically output structured data for your products. Generally speaking, that’s a good thing.

There is an issue you may run into if you have a Bigcommerce store and also use Yotpo. While Bigcommerce will output structured data for your various product details, it does so as microdata embedded in HTML tags in the theme files. On the other hand, Yotpo automatically embeds structured data from it’s service in the form of a JSON-LD object. On top of having some duplicate structured data in two different formats, each of the two types provides an incomplete snapshot of your product’s data.

Besides eliminating warnings and errors in your structured data, this cleans up the product’s HTML code in Bigcommerce by including only one single snippet on your product page. This solution can be applied to most Bigcommerce themes.

If you would like to get this set up on your Bigcommerce site, just fill out the form below and we’ll be happy to help!

Let's build something awesome together.

Your vision, our expertise.